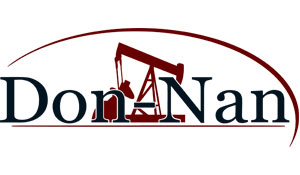 Vernon and Dorothy Carruth founded Don-Nan in 1962 in Midland, Texas. The company was named for their two children, Don and Nancy.

What began as a two man pump repair shop primarily using O'Bannon parts, evolved over the years into one of the largest rod pump manufacturers and most sophisticated repair facilities in the world by the late 2000s.
Don Carruth spent time during his formative years working on pumps and learning about the oilfield business. Not long after his return from military service, Don became more involved with the company as Vernon's health began to deteriorate, eventually taking over the business entirely.
Vernon passed away in 1978, and Dorothy in 2013. Dorothy remained a constant presence at Don-Nan until her retirement in 2008; her expectations of a clean and orderly work environment still persist to this day!
Don's reputation is one of tremendous integrity. His character has resulted in an obvious carryover throughout the business as evidenced through commitment to excellence in service, quality,  and innovation.
Don-Nan grew methodically throughout the years by adding service centers, wholesale warehouses, and the manufacturing capacity to supply them. Over the past decade, Don-Nan has been particularly focused on increasing technological capabilities; introducing new patented designs to the market, a web-based pump service tracking system, and most recently the addition of a newly constructed chrome plating facility that exceeds environmental standards.

After many meetings and careful consideration, Don Carruth came to the decision to sell the company to Schlumberger in 2014. Under new leadership and with the backing of Schlumberger, Don-Nan continues to add manufacturing capacity, technology, and service facilities throughout the United States.