Why the Aerospace Industry Has Its Eyes on Midland, Texas 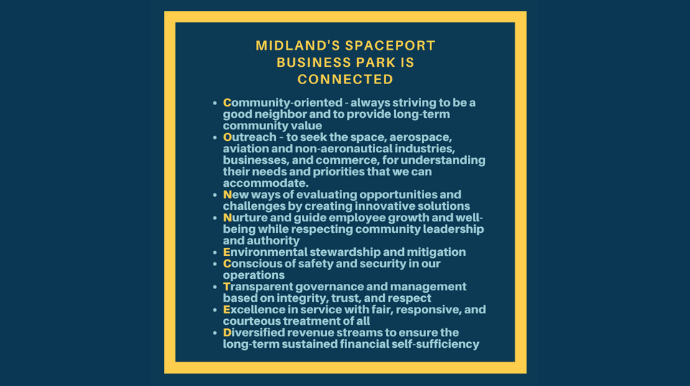 Midland could become a hub for the commercial aerospace industry and the city is off to a good start: Kepler Aerospace, AST and Science, and its wholly-owned subsidiary Nano Avionics are currently located in the Midland Spaceport Business Park. Together, they have committed to creating over 180 jobs and have placed Midland on the map for the industry. In an interview with NewsWest9, John Trischitti, Midland Development Corporation (MDC) Executive Director said, “The projections are that in the next decade the commercial aerospace industry could be a trillion-dollar industry.” Locating even a portion of those businesses in Midland could be a gamechanger for the local economy.

InterFlight Global Corporation works with the MDC to help recruit companies that are active in this space. Oscar Garcia, Chairman & CEO, said, “We are attracting companies from aerospace technology startups to large publicly traded aerospace and defense leaders. We are specifically focused on companies involved in the satellite, high speed aircraft and spacecraft, and aerospace technology spaces. The intention is to nurture and develop an ecosystem of companies that form a cluster. In turn, these companies will bring their subsidiaries, vendors and strategic partners. For instance, Kepler Aerospace, an innovative technology and flight operations company, has agreements with users of the Midland Altitude Chamber Complex to engage in high tech research and development.”

The companies the MDC is engaging are attracted to Midland’s unique assets, including the wide open spaces that have historically been ripe for oil and gas exploration. Now, these open spaces are not just earth-bound, but in the air. Midland’s open skies are exactly what companies are looking for because the city doesn’t have the congested air traffic that makes it difficult to launch prototypes, run tests or launch satellites. Oscar Garcia told CBS7 that companies can take off and fly into the White Sands Missile Range, 300 miles due west in New Mexico. “It’s like a playground for engineers to fly and test equipment,” he said.

Though air traffic is conducive to new industries in Midland, the Midland International Air & Space Port is the first to be co-located with a major commercial airport. This is important because the Space Port is FAA-approved as a Commercial Space Launch Site. The launch site is currently being used by AST & Science, a satellite testing and manufacturing company, which has raised over $128 million in investment. The commercial aerospace industry can utilize this launch site for commercial applications or to test prototypes. Garcia lists the Spaceport’s licensing as an attractive asset, as are Midland’s skies for being, “America’s clearest and most unobstructed airspace to fly and test air and spacecraft flying fast and high.”

Commercial Aerospace Industry Finds Everything It Needs in Midland

Midland has the open skies and open spaces to support the commercial aerospace industry. With sites available at the Spaceport Business Park, access to the Midland Altitude Chamber Complex (MACC), and the ability to launch satellites and other equipment from the FAA approved site, Midland has the infrastructure the industry needs to innovate and expand, and the workforce to support this expansion.

Midland’s oil and gas workers are well suited to work in aerospace. A large number of engineers work in the industry, as do skilled laborers that understand what it’s like to work in an intense, high-tech environment. These workers can easily transfer their skills working with high pressure temperatures and materials to be ready to work in aerospace. That’s good news for an industry that will need access to human capital as much as they need access to the skies. Fortunately, Midland can supply both.

About the Midland Spaceport Business Park

We invite site selectors, executives and entrepreneurs to learn more about locating their company in the Midland Spaceport Business Park. Click here or contact sharris@midlandtxedc.com for more information.

Email Marketing: Still The Most Powerful Tool To Take Your Business To The Next Level

Oct 26 2020
The key to running a successful business is enticing customers and clients to do business with you. So whether you’re scrambling to lure customers back during a global pandemic or expanding your markets during “normal” business times, the question is, How do you do that? What are the best way...Continue Reading

Oct 22 2020
Microsoft Corp., in collaboration with the state of Texas, announced new programs and events to address the need for digital and technical skills in the workforce. The digital alliance is intended to create new economic opportunity, close equity and digital skills gaps, and prepare a workforce for the 21st century. “Th...Continue Reading

5 Creative Approaches To Gain The Attention Of Businesses

Oct 19 2020
So your community didn’t get on the finalist list of Amazon HQ2. Now what? The site selection process is changing and adapting with the trends in business. While it may still be important for you to look for potentially large company relocations, many good business expansions can occur with smal...Continue Reading